Building high pressure brings rapid warming out west following an exiting storm system with above average temperatures into the weekend, moderating to seasonal averages next week. A weak monsoon pattern across Central Mexico will bring continued showers and thunderstorms to the region through next week. Regions to the north will warm to well above averages by the weekend under a building high-pressure system. Florida will see seasonal temperatures and dry conditions this week. Showers and thunderstorms are expected in the southern half of the state Sunday into early next week.

Currently, California trucks have been adequate but seem to tighten up as the week progresses. Look for trucks to get tight with rates increasing as we start the Mothers Day pull. Washington apple truck supply is adequate. Idaho onion/potato trucks remain steady as well. The national average on diesel rose slightly and is currently at 3.157 per gallon. An increase of .574 from this time last year. California prices increased as well and are now at 3.834 per gallon. Crude oil remained steady and is currently at 67.50 per barrel.

Cauliflower: Supplies are decreasing due to colder temperatures in the growing regions that will cause the current market to trend higher.

Pears: Red pears supplies are limited and only in a few hands.

Squash (Western): The market is very strong on the west coast. Light supplies and high demand on zucchini and yellow s/n.

Asparagus: Central MexIco should start up in the next 2-3 weeks.

Berries (Blueberries): We expect to see increased production in central and southern California over the next two weeks. North Carolina is expected to start by mid to late May.

Berries (Blackberries): Domestic harvest will gradually start over the next 2-4 in Santa Maria, followed by Salinas and Watsonville by early June. Georgia will start harvest late May.

Berries (Raspberries): California harvest is slowly starting and will improve over the next 2-3 weeks.

Berries (Strawberries): Oxnard is trending down and will finish the season over the next 2-3 weeks. Salinas and Watsonville production is increasing week over week. 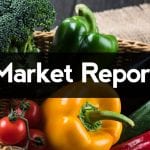 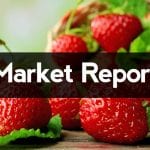